From rescuing dogs, to be chased by bears, every day is an adventure for Jordan. A stellar 2021, capped off with a perfectly executed race at Kiawah for a marathon PR, Jordan continues to push himself further. Who knows where his adventure will take him next? For now find out a little more about his life and journey to get here so far. 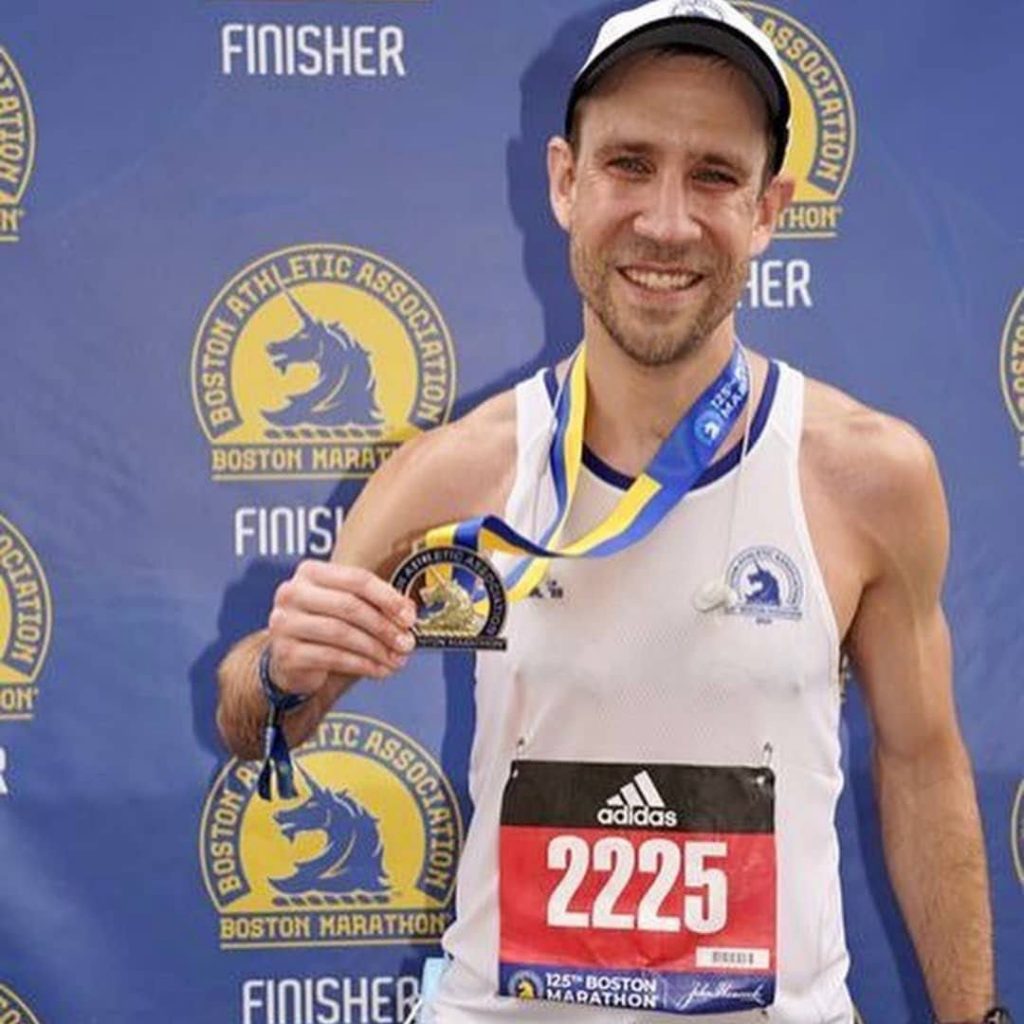 Where are you from? I am from Lincolnton, North Carolina

How long have you lived in CLT?  I moved to Charlotte in January of 2013 but being from Lincolnton, Charlotte has always been a place in my life.

Favorite Sports Team? I have pulled for the Panthers since they came to town in the early 90s. I also pull for my fellow ECU Pirates as well.

Hobbies outside of running? I love to move whether it be running, going to the gym or hiking. I also read a lot. My favorite books are Sapiens by Yuval Noah Harari, The Big Picture, by Sean Carrol and A Short History of Nearly Everything, by Bill Bryson.

Tell us about your running story. I haven’t always been as avid of a runner as I am today, but I have always used it as a stress reliever or a way to stay in shape. In November of 2016 I decided to put down alcohol and begin running again after going on a long hiatus. My twin brother suggested that we do the 2017 BB&T Corporate Cup Half-Marathon and I signed up mainly to give me something to do with all the new free time I had acquired by stopping drinking. Running gave me purpose and a sense of empowerment and control over my body. I learned that I alone was in charge of the decisions I made. The world became clearer and I saw concrete and measurable progress and self-development. I was proud of myself for the first time in a very long while. I actually liked this new person I was becoming.

The BB&T Half was my first half-marathon I had ever run. I finished with a solid 1:35:57. Considering I had gotten off the couch just three months earlier, I knew I had found my passion in life and I was ready to see how far I could take it. I set a new objective that day and challenged myself to find out how fast I could run a marathon. I started training literally the next day for the 2017 Charlotte Marathon. I trained all summer, stayed focused and worked hard to see how good of shape I could get in.

In November of 2017, almost one year to the day from when I put down the bottle, I ran the Charlotte Marathon and finished with a time of 3:14:39. To this day, I still haven’t answered the question of how fast I can run a marathon. I am still working hard to get faster and stronger. I qualified for Boston at the Charleston Marathon in January of 2020, which was my fourth attempt at doing so. I did so with the help from Esayas Nida, one of the best friends I could ask for. He is an amazing athlete and I am still chasing him, trying to catch up. After Covid shut everything down I didn’t get to run another race until 2021 which became the year of the marathon. I ran in six of them that year and registered my personal best in four of them. This is thanks to the coaching of Mike McMillen and the rest of my awesome FlowMotion team. 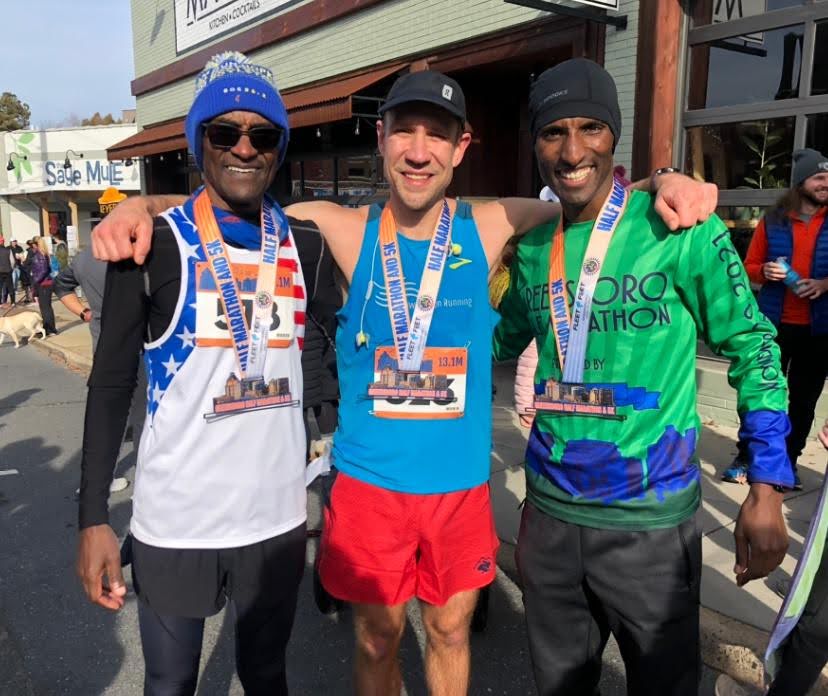 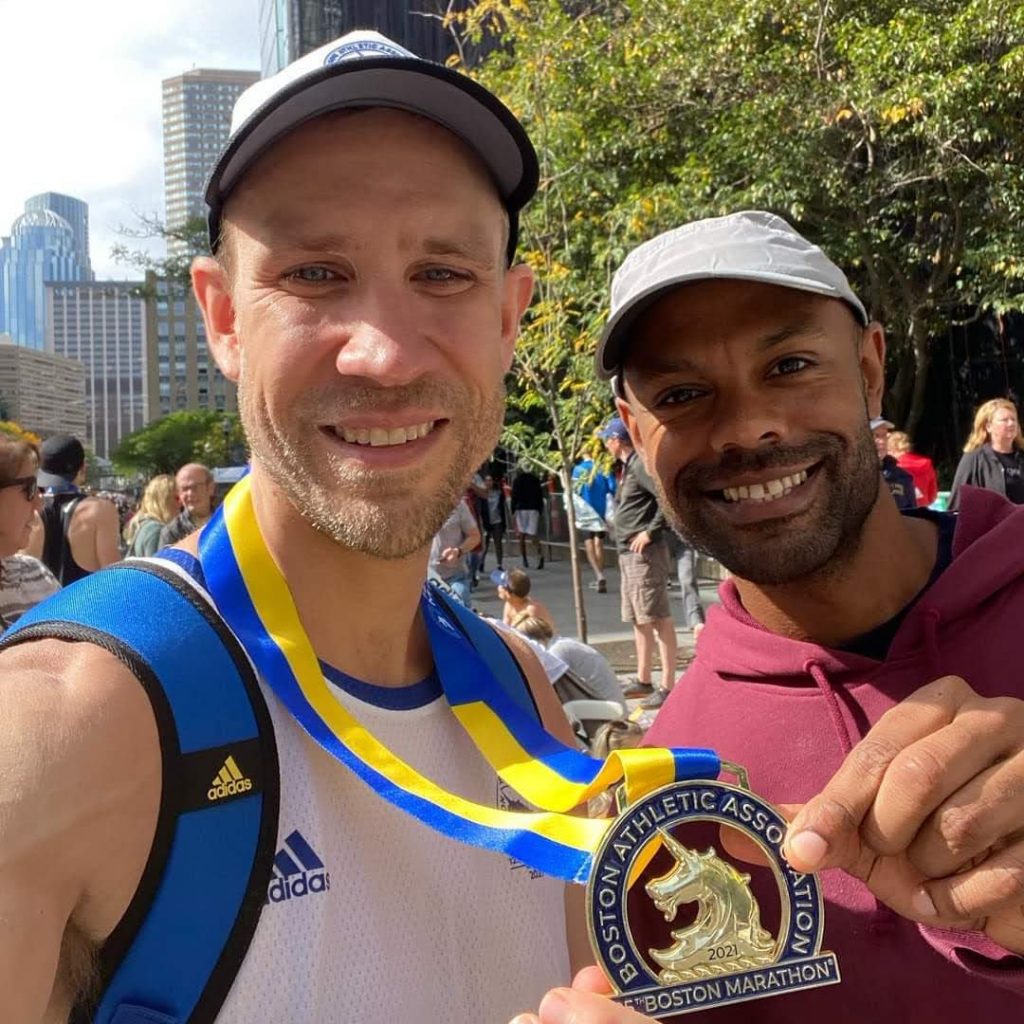 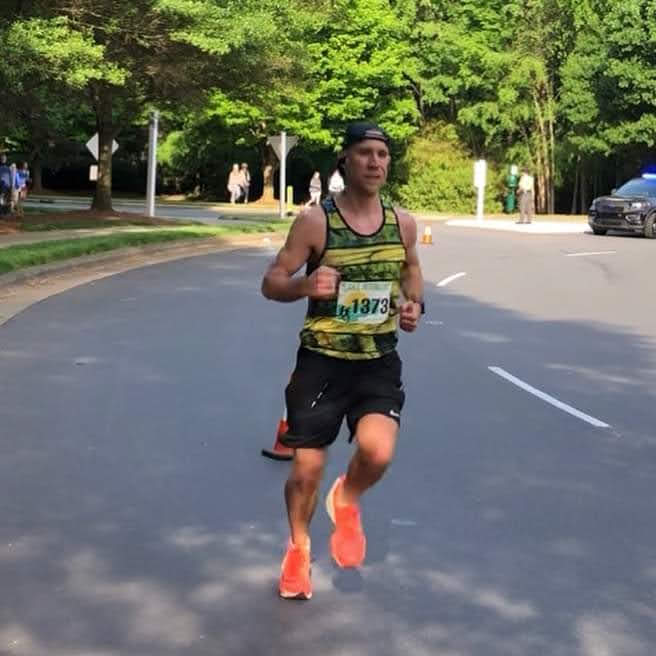 What do you enjoy about running? Running allows time for myself. It forces me to be alone with my own thoughts, to set goals and to piece together ideas. It helps with anxiety and puts me in a better mood. To sum it all up: starting back running was the best decision I have ever made when it comes to my physical and mental well-being.

What music/podcasts do you listen to on your run? I love all kinds of music and podcasts. Literally all kinds of music. From Classical to Southern Rock. I use Spotify every time I start a training cycle. As far as podcasts: Joe Rogan, Pod Save America, The Axe Files and This American Life.

What race are you working toward and what is your goal? I am scheduled to run Chicago in October. I am also planning to run in the Charlotte Marathon in November, which will mark five years since my first marathon attempt. My goal has always been to see how fast I can run a marathon.

What race or performance are you most proud of and why? I am most proud of my Kiawah Island Performance in December of 2021. I came off Boston the previous October and can’ tell you how hard I trained. I was in the gym every day and so strict on my diet. I ran every workout like it was vital for success. About a week out from the race, my coach told me we might need to re-evaluate our goals if the humidity got too much higher or the temperature higher. Unlike previous races, I stopped checking the weather all together. I didn’t even glance at it and instead really focused on what I could control, which was the final preparations for the race. It was still hot and humid but it didn’t phase me and I didn’t work off a bunch of energy by stressing out, which I was proud of.

Favorite race you’d recommend to others? I recommend Boston. Running and getting my personal best there in October of 2021 with a time of 2:50:11 was the highlight of my running career. There will never be another feeling like coming down Boylston Street to the finish line of Boston. Kiawah Island is also a special place. I PR’d there with a time of 2:48:33 which was 6th overall, two months after Boston in December of 2021 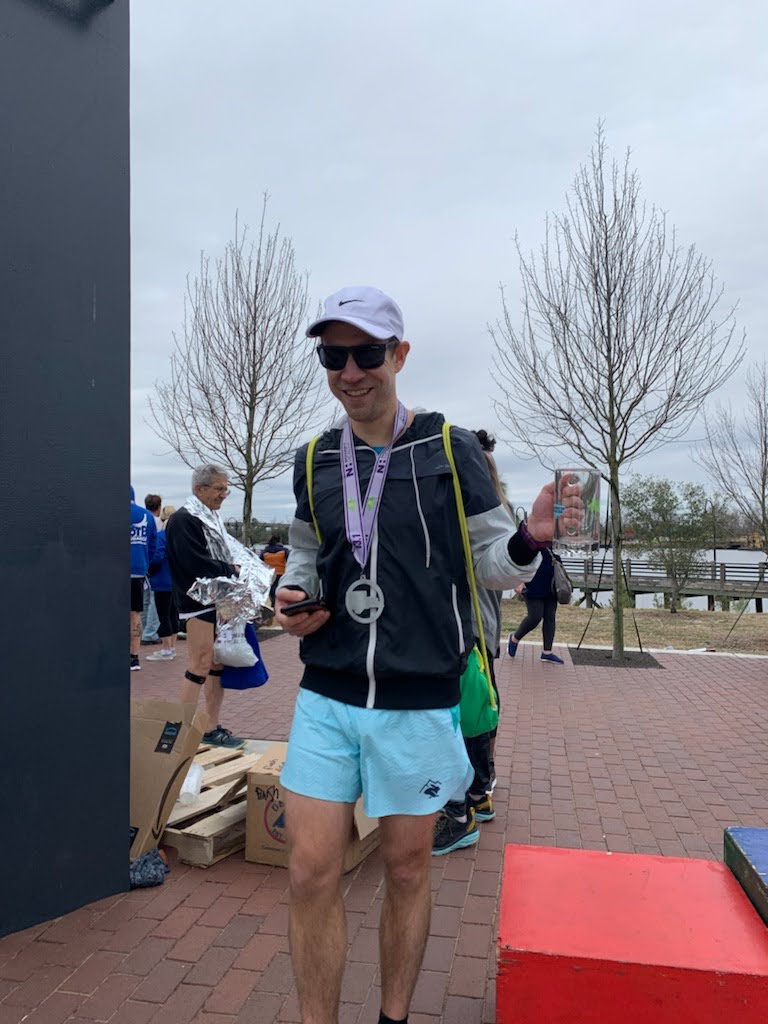 Favorite Workout? I love my long runs. I spend the week mapping them out, planning how to make them efficient and avoid annoyingly busy intersections.

What is your current shoe rotation? Do you use a particular shoe for different runs? The Vaporfly for races. I rotate between Topo and Hoka for my training runs and Saucony Endorphins for my speed workouts.

How do you prepare before a big race? By the time the race is here, there is nothing more I can do except execute. The night before the race, I go through my Strava workouts and review all of the runs that got me to this point. Sometimes it is easy to forget all of your hard work and it’s a good way to get me motivated and make me feel ready. I try not to look at any one race as “the big race.” They are all big so I just relax, know that I have put in the miles and enjoy myself. I usually can’t wait to get to the starting line because I love the experience of running a marathon.

What is the greatest lesson you’ve learnt about training for a race? Training for Boston this cycle was incredibly difficult. An ongoing, pesky hip injury has kept me from training as much as I have wanted to. My goal for Boston was to break my personal best of 2:48:33, but I fell way short of that and was unable to participate. I worked for years to qualify for Boston and I never expected to have to make that call. I did get to go to Boston and watch my running teammates and friends achieve their life-long goals of running in Boston which was super inspiring and I was so proud of everyone who got to participate. Being forced to take a moment and reflect on my past races has shifted my thinking from, “what can I do better?” to “look what I have done that I can build on.” I have made incredible gains at running marathons and I will continue to push myself.

For the next race I will practice gratitude and remind myself of how far I have come. If you achieve a goal at a race, take a moment and embrace it and applaud your hard work. So many times, we runners want to do an autopsy of our races and figure out how we can take three seconds off here or ten second off there. Five years ago, I never would have thought I would be running as fast as I have and I am so proud of my accomplishments and incredibly appreciative to everyone in my life who have helped me get to where I am today. Going forward I won’t forget that nothing else matters except my love for running. I need to take care of myself better so I can keep going well into the future.

What mantra do you use to push you during races or workouts Heard this a while back and I try to practice it to stay focused in the present moment: On the Inhale: “Present Moment;” on the exhale, “Wonderful Moment.”

Is there anything we should know about you that we likely don’t already know? You may not know that I have a twin brother!